Is It Easier to Make Ales or Lagers ? 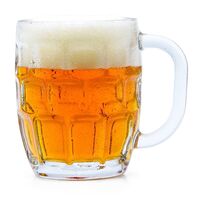 Many beer drinkers categorise ales and lagers based upon how their beer looks and tastes, but brewers know it’s not that simple. Find out more about these 2 styles here...

The difference between ALES and LAGERS, which style is easier to home brew?

It’s Friday night and a cold frothy is calling your name…do you grab an ale or a lager?  Tough call. All beer is either an ale or a lager, yet the two styles offer varied choices. The sweeter, more full-bodied ales offer a more robust flavour profile than lagers which tend to be cleaner, crisper, and mellower on the palate.

Many beer drinkers categorise ales and lagers based upon how their beer looks and tastes, but brewers know it’s not that simple. It’s how they are brewed that is the difference; different yeast types and fermentation temperatures produce the varied flavour profiles. Ales are generally considered easier to brew as the process is shorter (less patience required!) and brewing temperatures are warmer, but lager can be equally satisfying and rewarding for the home brewer.

A little history on Lagers vs Ales

In German, ‘Lager’ comes from the word ‘lagern’ meaning ‘to store’ and it was back in the Middle Ages that the Bavarians happily discovered that when they stored their beer in the winter ice caves, it continued to ferment. They enjoyed the resulting smooth tasting beer so much that they passed a law called the Bavarian Purity Law of 1516 which forbade brewing beer during summer[1], which essentially did away with ales which needed warmer brewing conditions.

The invention of refrigeration in the 19th century saw lager consumption soar as cool fermentation became more accessible and even today, lager remains the most popular style of beer around the world. Fortunately, however, ales did not fade into the never never…in the last 40 years ales have made a huge comeback thanks to a new era of craft breweries and a boom in the popularity of home brewing.

Ales are fermented with top-fermenting Ale Yeast at the top of the fermentation tank at warm temperatures (18 -22 °C) creating a thick layer of foamy bubbles during the fermentation process. They are typically fruitier, aromatic and have a more complex mouthfeel than a lager. Ales often have a higher alcohol content because the ale yeast is more tolerant of alcohol.

Lagers, on the other hand, are fermented with bottom-fermenting Lager Yeast at cooler temperatures (10-15 °C) at the bottom of the tank. The cooler temperatures allow the lager to ferment more slowly, producing less carbon dioxide and less foam in the tank compared to ale fermentation. The cooler temperatures and ‘low and slow’ fermentation also discourage the esters that are a feature of ales.   Then, there is an extra step in the process - and this is where the patience kicks in - the lager is stored cold for a few weeks to develop the subtle flavours and boost the clarity. The flavour profile of a lager is usually a crisper, cleaner and mellower to the palate than an ale.

If you attempted to brew lager with lager yeast at warmer temperatures, the results might see your mates skipping your place and heading to the pub for their Friday night drinks! The beer quality would be compromised due to an undesirable higher alcohol to esters ratio, a reduction in volatile acids and increased fixed acids which would affect the flavour balance and produce a less aromatic, less enjoyable beer to drink.

Having explained the key differences between ales and lagers, it’s fair to say they can share same some things in common, so technically their characteristics are not always mutually exclusive!

Some Lagers can be brewed successfully at warmer temperatures (18-20 °C). The California Common or Steam Beer is brewed with bottom-fermenting lager yeast but using higher fermentation temperatures than traditional lager, producing a unique flavour style incorporating both ale and lager characteristics. If you’re keen to give this one a crack, it’s an easy beer to brew at home with our Mangrove Jacks Californian Lager Yeast.

Other additives such as malt and hops can be added to lager homebrews which can change the flavour profile, producing more modern ‘hoppy’ lagers.

As home brewing and craft breweries continue to grow in popularity, we will see further melding of the ales and lager characteristics as brewing experimentation and tastes evolve. That said, the classic styles will be here to stay.

Here are some of our top picks of excellent ales and lagers that brew well at home!